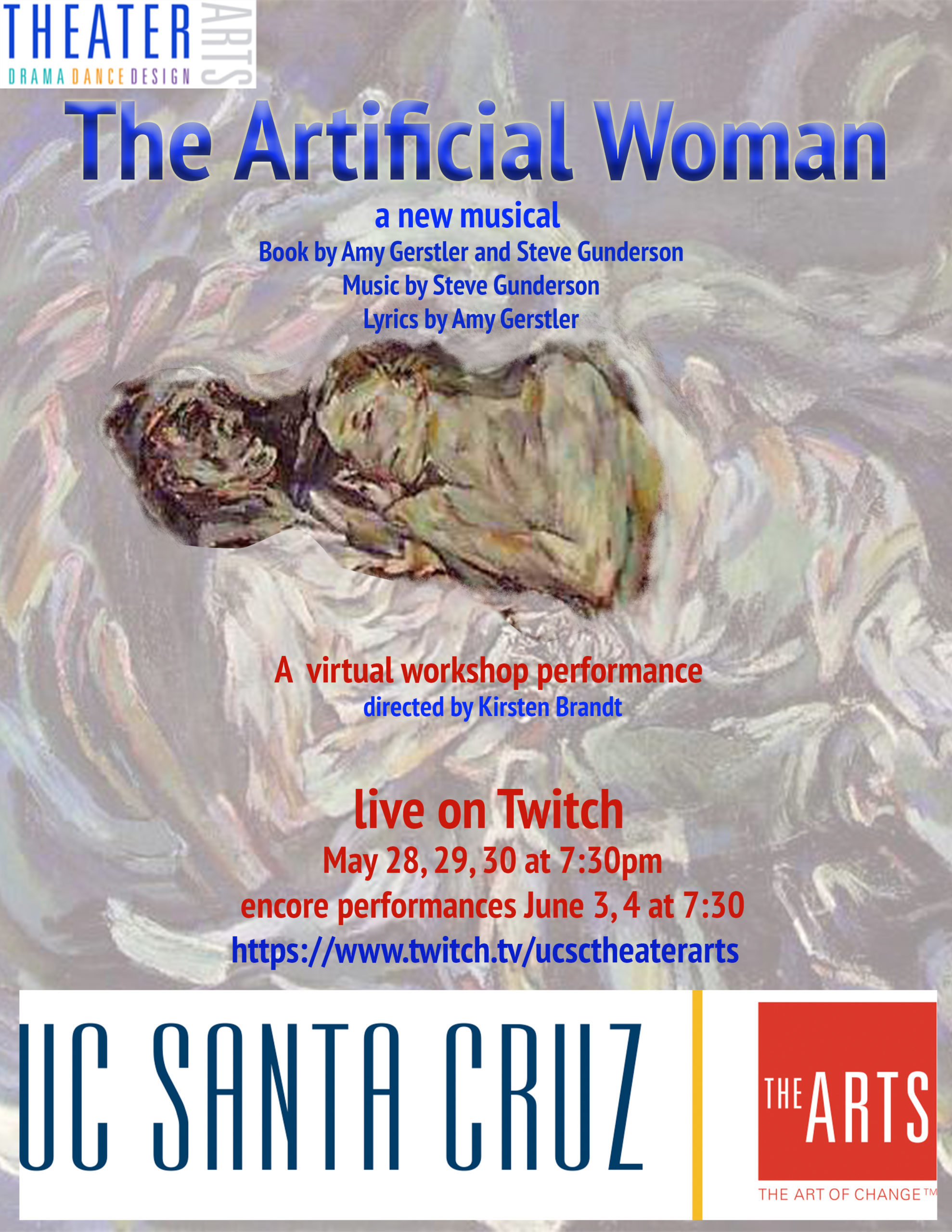 A quarter-long (Spring 2021) developmental workshopping of The Artificial Woman at University of California, Santa Cruz, with participation by the creators of the musical (Steve Gunderson and Amy Gerstler) culminated in virtual performances in May and June of 2021, directed by Kirsten Brandt, Assistant Professor of Musical Theater at San Jose State University. The musical will be staged as a full production by the UCSC Theater Arts Department in Winter Quarter, 2022. The Artificial Woman (book by Gerstler and Gunderson, music by Gunderson, lyrics by Gerstler) is historical fiction, based on the real-life tempestuous, nearly three-year relationship between Austrian artist Oskar Kokoschka (1886-1980) and Alma Mahler (1879-1964), a composer and widow of composer Gustav Mahler, and the break up that inspired the obsessed Kokoschka to commission an artist to create a life-sized Alma “doll.” 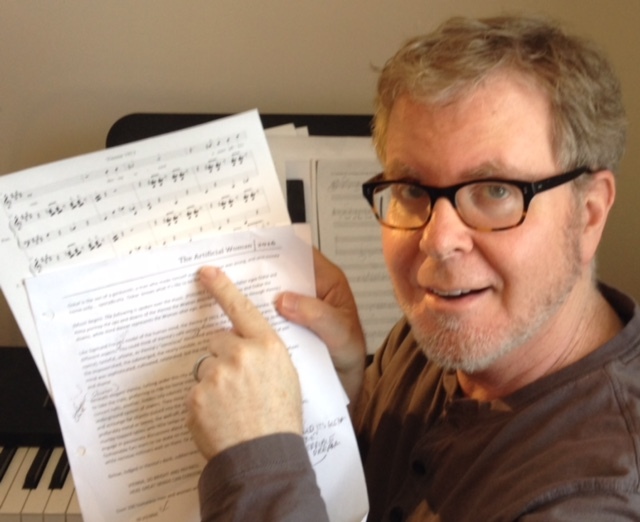 Steve Gunderson (music/book), a 2016 Creative Catalyst Award winner for The Artificial Woman, is an actor, singer, composer, arranger, and playwright. Born and raised in San Diego, he studied in London and lived in New York for 15 years before relocating in Southern California. He now divides his time between San Diego and Los Angeles, where he lives with his husband Kaore Bonell. Steve co-wrote, starred in, and was the musical arranger for Off Broadway’s Suds, which has gone on to have dozens of productions worldwide. He co-created (with Kathy Najimy), arranged, and starred in Off Broadway’s critically acclaimed Back to Bacharach & David, which was revived in Hollywood with the participation of Burt Bacharach and Hal David. Steve’s show, Everybody’s Talkin’: The Music of Harry Nilsson (co-created with Javier Velasco), starring Tony Award winners Alice Ripley & Gregory Jbara, had its world premiere in May 2015 at San Diego Rep Theatre. His collaborative association with Javier Velasco has included working together on the premieres of The Brontes and Eternally Bad, as well as many other projects. An award-winning composer, Gunderson created scores for A Christmas Carol, Dixie Highway, Rock Candy and others. He co-wrote the book and arranged the score for More Magic (Canadian Tour). He arranged the score for Yours Truly, which was developed at Theatreworks and the York Theatre and had its premiere at Naples Players Theatre in 2020. He is currently on the creative team of the new musical House of Dreams, which broke box office records in its regional premiere at San Diego Rep and is slated for a Director’s Lab in New York in the fall and development for a Broadway production.

For over two years he played “Sparky” in Off Broadway’s Forever Plaid (directed by Stuart Ross) and logged over a thousand performances of the role in Los Angeles, Las Vegas, and San Diego. Steve did multiple voices on TV’s King of the Hill and (The New) Beavis & Butthead. 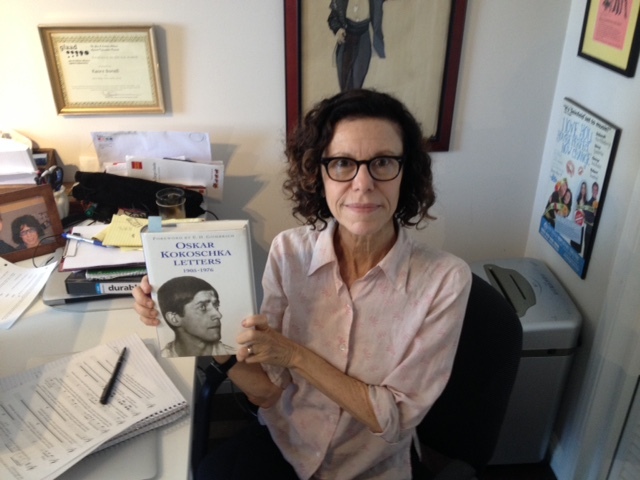 Known for its wit and complexity, Amy Gerstler‘s poetry deals with themes such as redemption, suffering, and survival. Author of over a dozen poetry collections, two works of fiction, and various articles, reviews, and collaborations with visual artists, Gerstler won the 1991 National Book Critics Circle Award in Poetry for Bitter Angel (1990). Her early work, including White Marriage/Recovery (1984), was highly praised. Gerstler’s more recent works include Nerve Storm (1993), Medicine (2000), Ghost Girl (2004), Dearest Creature (2009), which the New York Times named a Notable Book of the Year, and Scattered At Sea (2015), which was a finalist for the National Book Award. Her book Index of Women was published in April 2021. In 2019, she received a Foundation for Contemporary Arts CD Wright Grant. In 2018, she was awarded a Guggenheim Fellowship. 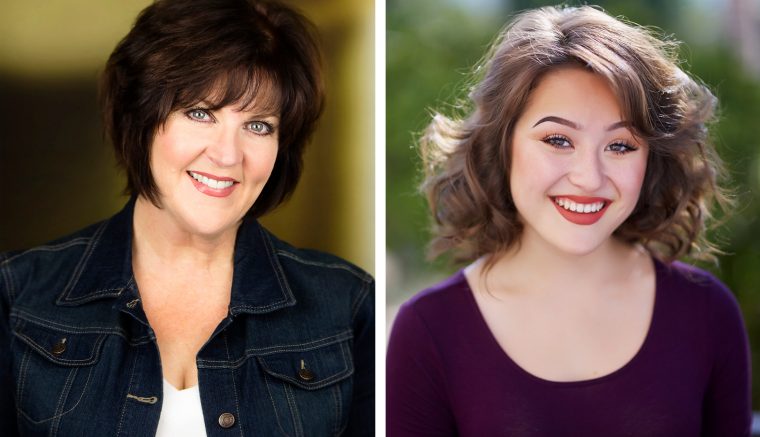 “The Artificial Woman” is excited to announce two additional cast members for the upcoming reading on October 9 in San Diego. MELINDA GILB will play Hermine Moos & Others, MICAH FONG will play Anna Mahler. They will be joined by the cast from reading #1

Look for an upcoming announcement on how to make reservations (admission is free) for this reading. It will incorporate rewrites and new songs.